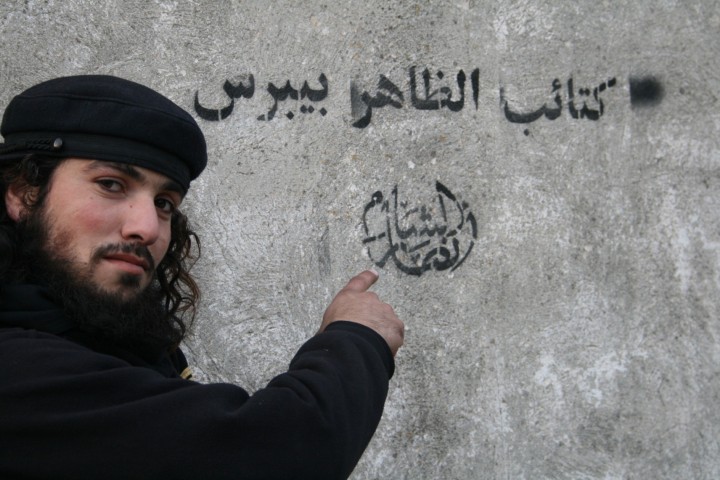 Islamist brigades have grown exponentially in Syria’s rebel ranks over the past three years, partly due to the decline of the mainstream groups fighting under the banner of the Free Syrian Army (FSA). In northwestern Syria, one of these ascendant Islamist factions is a group that analysts know very little about but that now helps shape the crucial battles in Syria’s coastal region: the Ansar al-Sham Battalions.

Ansar al-Sham, whose name translates in English to “Helpers of the Levant,” is mostly active in the Latakia and Idlib Provinces in Syria’s north, where I recently traveled to report on and study the Syrian uprising. It is clear that the group has grown in strength over the last three years. It has allied itself with other Islamist groups in the so-called Islamic Front, a major coalition announced in November 2013 that is now embroiled in heavy fighting against the jihadi faction known as the Islamic State of Iraq and the Levant, or ISIL. Having successfully adapted to the shifting tides of rebel politics, Ansar al-Sham now seems set to benefit further from the ISIL being pushed back.

According to Aron Lund’s paper, Syria’s Salafi Insurgents: Rise of the Syrian Islamic Front, Ansar al-Sham formed out of eleven core battalions. Since Lund’s report was published in March 2013, its numbers have grown to over 2,500 men, according to Abu Mohammed, who leads the al-Zahir Baybars Battalion, which is a subfaction of Ansar al-Sham.

When traveling in the rebel-held areas of northern Latakia, I was able to see that Ansar al-Sham plays a crucial role in aid delivery in the areas where it dominates. The group has been catering to internally displaced persons, and it seems to have supplanted the international aid organizations in delivering humanitarian relief to some of these areas. White tents with the Ansar al-Sham logo prominently displayed are on show in the fields of northern Latakia.

Interestingly, the group also highlights its aid work in its propaganda, such as on its YouTube channel, to an even greater extent than its battles with the regime. It is as if the organization is following a strategy similar to the classic Muslim Brotherhood doctrine, seeking to win the population over through social work.

The founder of Ansar al-Sham has so far been unknown. Many analysts have tried to point to to the London-based Salafi preacher known as Abu Basir al-Tartousi, since there are YouTube clips of him together with the group. But Abu Basir has denied being the leader of Ansar al-Sham and says he works with many groups.

Abu Mohammed, the Ansar al-Sham subcommander, told me that the group was originally founded by a man from Latakia City called Abu Omar. Abu Omar is an adherent to Salafi Islamist doctrine and a veteran of the war in Afghanistan who returned to his native city to take over the family sweetshop. Other sources confirm this: Salam Abdelkarim, who is the Latakia correspondent for the pro-opposition Shaam News Network and himself a native of Latakia, also knows of Abu Omar and says he was admired by the local Sunni boys because he refused to be intimidated by the regime and stuck to his religious convictions.

The sweetshop owner, though, is not the military strategist. Abu Omar seems more involved in providing guidance and funds, and there appears to be a close link between Saudi Arabia and Ansar al-Sham when it comes to the aid work. Military strategy instead falls to a Chechen member of Ansar al-Sham known as Abu Musa al-Shishani, who is wary of the limelight.

Despite the Chechen’s presence in its leadership, Ansar al-Sham remains overwhelmingly Syrian, consisting of a mixture of local army defectors, shopkeepers, workers, farmers, and artisans. While the group is not averse to foreign fighters, I have visited a number of local battalions attached to Ansar al-Sham and didn’t come across a single foreigner. According to Abu Jihad, second in command to Abu Mohammed in the al-Zahir Baybars Battalion, the fighters of Ansar al-Sham are organized in a military register (diwan) and each is paid a salary of $60 per month. Relative to what a Syrian citizen would earn doing national service, that is an acceptable income.

BALANCING BETWEEN THE FSA AND THE JIHADIS

Politically, Ansar al-Sham wants a Sunni Islamic state within Syria’s borders and rejects secularism. The group has managed to straddle the ideological fault lines of the uprising, even as Latakia became the scene of conflict between FSA factions and radical jihadis. In summer 2013, a group of ISIL members led by the Iraqi jihadi known as Abu Ayman al-Iraqi killed the rival FSA commander Abu Basir al-Ladhiqani, a member of the FSA’s Supreme Military Council, raising ISIL-FSA tension throughout Syria.

According to one of its commanders, called Abul Harith, Ansar al-Sham does not work with the FSA. But neither does it fight the FSA, and Ansar al-Sham has in fact forged local alliances with FSA commanders such as Abu Basir al-Ladhiqani, even though its members grumbled about his conciliatory policy toward the Alawites and perceived hubris.

Most Ansar al-Sham commanders that I interviewed clearly condemned the ISIL’s Abu Ayman al-Iraqi for killing Abu Basir al-Ladhiqani. Yet, on the ground at least, Ansar al-Sham did not break ties with the ISIL completely, despite considerable tension between them—partly, one suspects, because many of the ISIL’s members in northern Latakia were local Syrian boys who are connected to Ansar al-Sham members through family and social ties.

From the numerous interviews I did with its members, it is clear that many Ansar Sham commanders and fighters support the approach of the al-Qaeda–aligned faction known as the Nusra Front, which has decided to focus on removing Assad before building an Islamic state. The group has also had good relations with smaller jihadi factions, like the Ansar al-Mujahedin Battalion led by Sheikh Suqor or the Sham al-Islam Movement led by Abu Ahmed al-Maghrebi, which has a large North African contingent.

OPEN TO ALL ISLAMISTS

Moreover, the vagueness of Ansar al-Sham’s religious ideology makes it attractive to religiously conservative Sunni Syrians, including wealthy funders of the rebellion. Its close ties with members of Syria’s Sunni religious class, like Dr. Khaled Kendo, and the fact that its commanders do not actively embark on a program of religious indoctrination means that Ansar al-Sham is able to absorb Sunni Muslims of all persuasions. The group delivers religious lectures, but these are held by local clerics in touch with the community. Abu Mohammed and his battalion, which used to belong to the FSA network, is a good example of how Ansar al-Sham recruits. Abu Mohammed admits that he wanted to join Ansar al-Sham partly due to a lack of funding but also because of his own religious evolution. He met with Abu Omar, whose vision of Islam he deemed to be “more correct.” A decision to join Ansar al-Sham was then made by Abu Mohammed and his second-in-command, Abu Jihad, and their fighting men acquiesced.

The way in which Ansar al-Sham has played its cards and its presence in the important coastal region suggests that if the Islamic Front alliance manages to regain its footing after the infighting with the ISIL has ended, this medium-sized Islamist group could go on to play a larger role both in rebel politics and the Syrian civil war.

This piece was first posted on Syrian in Crisis blog here