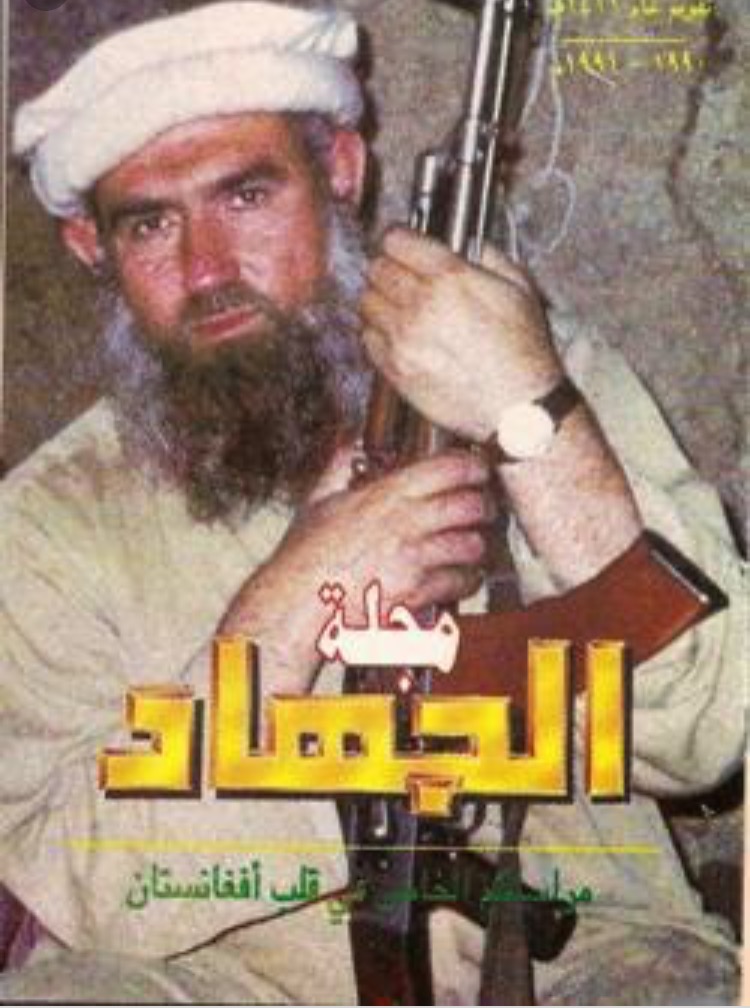 Dr. Abdullah Azzam is widely seen both by security analysts and Jihadists as the father of Global Jihad. Dr. Thomas Hegghammer for example, who is soon to publish an important biography on Abdullah Azzam argues that his ‘Palestinianess’ certainly shaped his world view and pulled him towards transnational jihadism.

Others however, namely many of his family members, respectfully disagree with this assessment. The son of Abdullah Azzam, Huthaifa Azzam for instance, believes that his legacy has been completely misunderstood and that if his father was alive today he would wholly disagree with attacks on civilians carried out by al-Qaeda and its offshoots.  Abdullah Anas, Azzam’s son-in-law,  an Islamic scholar by training also favours this view. Mr. Anas brings a decade of fighting experience in Afghanistan to the table and is described by Pullitzer prize winning writer Lawrence Wright as  “perhaps the greatest warrior of the Afghan Arabs”. Abdullah Anas is soon to publish his biography, To The Mountains: My Life in Jihad from Algeria to Afghanistan (Hurst) 2019.

It is with this discourse in mind that I make available the introduction to a little known tract Abdullah Azzam wrote called: ‘On Jihad: Its Ettiquettes and Its Rulings’.

Some observations on the text:

My notes and comments are in brackets [] the other stylistic parentheses { } denote Quranic verses. I have expunged footnotes for ease of reading, however, Abdullah Azzam did cite scholarly works to make the work more authoritative.

On Jihad: its etiquettes and its rulings.

We praise God and with His praise we seek His guidance and forgiveness. We seek refuge in Him from the evil of ourselves and our evil deeds. Whom so ever God guides no one can misguide and whomsoever He guides no one can misguide. I testify that there is no God but Him and He has no partners and I testify that Muhammed is His servant and His Messenger.

I wrote this treatise on the rulings of Jihad because I felt that it was becoming forgotten. The verses of Jihad amongst many people have become about proselytisation and writing about Islam. And fighting has become something strange in the life of Muslims. I pray to God that he accepts our efforts to return the concept of Jihad to its rightful place in the minds of the Muslims. At the very least in terms of how the Muslim might think about the concept, however far he might be from its reality and its laws.

In this tract we have tried to write down some of the rulings on Jihad and its etiquettes in the hope that we may benefit and benefit others. We pray that God accepts this work from us and that this is solely for His sake. We pray that He gives us the life of the felicitous, and takes us as one of his martyrs. And that we are gathered on the Day of Judgment with the party of Mustafa [Another name for the Prophet Mohammed], Peace be upon him. Verily he is All Hearing and Oft Responsive.

This [definition] taken from [the Trilateral root]…Ja-Ha-Da [Perfect verb. Arabic like many semitic languages is based on trilateral roots] Yajhadu [imperfect] Juhdan [verbal noun]. The Verbal noun, al-Juhd, with the damma vowelling [the vowel equivalent of O/U in English] encompasses the meaning of extensiveness and capacity or power. As for al-Jahd with the fatha vowelling  [the vowel equivalent to A in English] encompasses the meaning of toil, labour and hardship. Al-Jahd is also used to denote the end point. So ‘Aqsimū billahi Jahada Aymanahum’ [They swore by God with the totality of their faith]- That the end point [and emphasis] here is their oath to God.

So al-Jahd and al-Jihad linguistically means that a man expends every effort to obtain that which he wants or repels that which he dislikes.

[Abdullah Azzam urges the reader to look at the classical and masterly dictionaries of Lisān al-‘Arab  of Ibn Manzur and the al-Qamus al-Muhit of the thirteenth century Persian lexicographer Muhammad Ibn Ya’qub al-Firuzabadi. This is standard form for Islamic scholars.]

Jihad: Its terminology and its place in the Shariah [Abdullah Azzam relies on classical and pre-modern understandings of Jihad. The fact that he is showing the opinions of the four Sunni legal schools is to emphasise the classical scholarly consensus of what Jihad means in the Shariah. Of course we should note the Shariah is not a monolithic entity and differed from locality, time and how it was practiced in various periods of Islamic history. See Wael Hallaq, Jonathan AC Brown, George Makdisi’s works on the development of Islamic jurisprudence ]

Hanafi definition: In the book of Fath al-Qadir by Ibn Humam [9th century jurisprudent]: “Jihad is to call the infidels to Islam and if they do not accept, you fight them. Al-Kasani has said in his al-Bada’ to: “expend every effort to fight in the way of God (most Glorified is He) through one’s person, tongue and other than that”

Māliki definition: Muslims fighting the Kāfir [sing. Infidel] who does not have a convent or treaty in order to raise the word of God, or bring it to them or to their land.

Shāfie’ definition: Al-Bajūri says “Jihad means fighting in the way of God. And Ibn Hajar says: legally it means to expend effort to fight the Kuffār [plural and emphatic form of infidels].”

The Hanbali definition: Fighting the Kuffār. Al-Jihad means fighting and expending every effort to raise the word of God.

Ibn Rushd says in his Muqaddima regarding Jihad of the Sword. “Every person who tires himself for God fighting against the Polytheists for the faith has struggled in His Path. But Jihad of the Sword applies to fighting the Kuffār with the sword until they have accepted Islam or paid the Poll Tax (jizya) and they are brought low.

Ibn Hajar says in his Fath al-Bari [Referring to the Mamluke scholar’s celebrated commentary on hadith]: One should understand from the expression Fī sabīl lillah [In the Way of God] to mean Jihad.

The Etiquettes of Fighting and its Rulings [General Principles]

Fighting in Islam has been prescribed in order to spread Islam, save humanity from the Kuffār and take them from the darkness of the ephemeral world to the light of faith and eternity.

Therefore fighting for this faith is to remove political, economic and societal obstacles for Islamic proselytisation. In fact, one can say that the role of Jihad: is to destroy the impediments that stand in the way of this faith in all the four corners of the world. For if people accept this religion there is absolutely no need for the sword, spilling blood, taking facilities and wealth. Islam came to improve and build not to damage and destroy.

Killing and fighting is a necessary role for Muslims because they carry the banner of monotheism. They are commanded to carry it everywhere. This cannot be emphasised enough.

For if we cannot preach our message then there is no choice but to fight the political organisations and powers that be, we must do it. Because they stand between us and the people. So if the political powers, the rich, and the tribal gatherings stand in our way then we will be compelled to fight them with weapons until they surrender to this religion. And then open up the paths between us and the people who we are obliged to save. {And fight them till there is no strife, and until the faith, all of it is for God. And if they cease then indeed Allah is cognisant of what they do. But if they turn away- then know that Allah is your protector. Excellent is the Protector and Excellent is the Helper.} [Quran Surah al-Anfal- the Spoils 8. verses 39-40].

And so fighting is to end strife and the destruction of tyrants that keep men away from the the religion of God. If these tyrants surrender and accept peace then there is no need to unsheathe the sword or to fight men.

For this reason Islam firstly aims to save men- even tyrants- from the fire; the fire of Ignorance [Jahiliya] in this world and the fire of the Afterlife. Thus the Prophet, Peace and Blessings be upon him, said to Ali [his cousin] on the day when he delivered the standard in the siege of Khaybar: “By God, if a single person is guided by God through you, it will be better for you than a whole lot of red camels’” Agreed upon [This hadith is found in Bukhari and Muslim the canonical hadith collections in Sunni Islam. See Jonathan AC Brown on ‘The Canonisation of Bukhāri and Muslim’ for a discussion on Muslim Prophetic tradition].

From here we can say that fighting is a necessity to save poor and oppressed people subject to human idols. And it is essential that one removes these human idols and temples of slavery and free the enslaved. If these human gods are to be separated from their pawns, then there is no choice but to destroy their pride and return them to their natural size, to the extent that they have unjustly shed the blood, the skulls of the innocent and the remains of the martyrs.

Indeed, Islam has set out great principles and clear guidelines that can be considered to be general rules of Jihad; the most important principle being: Fighting is to spread the message of Islam. Anyone who does not stand in the way, it is not permissible to fight him.

[The Prophet said]: “For every betrayer their will be a flag by which he will be recognised on the Day of Resurrection. This is a sound hadith.” [This is a found in Bukhāri]

Now we must explain these general principles with greater detail.