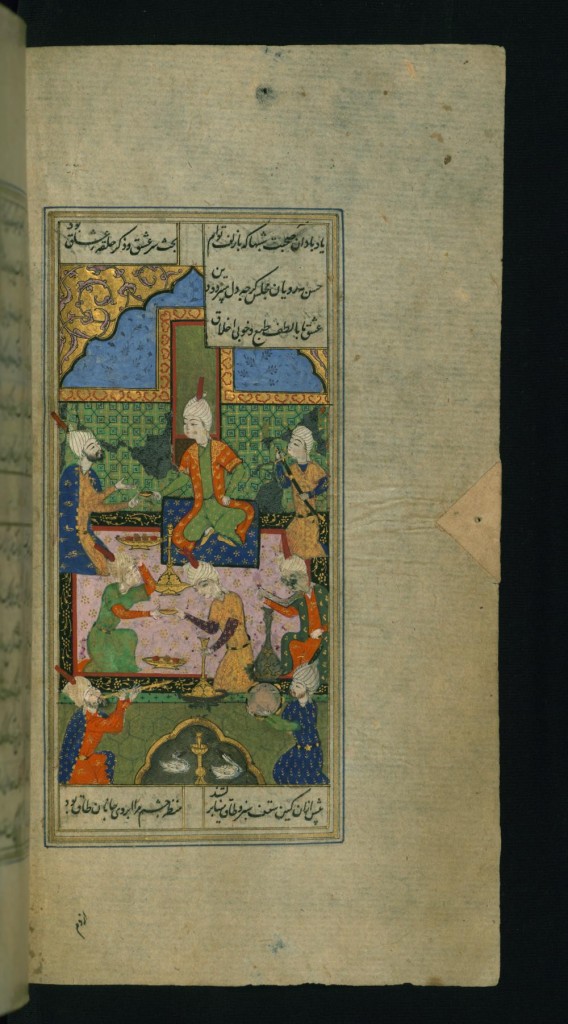 The first in a collection of pieces delving into Islamic history and its relevance today, Tam Hussein explores the power of poetry in the Abbasid Empire and its subsequent influence on the analysis of the Qur’anic language.

In the 8th century, al-Mansur the second Abbasid caliph, overheard his son reciting an ode of the pre-Islamic poet al-Musayyab to the philologist and tutor al-Mufaddal al-Dabbi. After the lesson, he expressed his pleasure at the poem saying, “If only someone would collect the best verses of these poets.” Al-Mufaddal did exactly that and bequeathed to Qur’anic exegetes, philologists and lovers of literature one of the finest anthologies of short verse in the Arabic language.

Al-Mufaddal’s academic efforts however, were not untypical of the litterateurs, poets and scholars of the Abbasid period (750-1258CE). In fact, their combined effort resulted in Arabic prose and poetry flowering and leaving their mark in world literature. Take for example the poet Abu Nuwas (756-814). This irresolute Marlowesque wordsmith is best known to us as the hedonistic trickster in The Arabian Nights, but his poetry influenced Urdu verse just as much as it influenced the quatrains of Omar Khayyam and Hafiz. It is no exaggeration to say that since the establishment of Baghdad in 762 to its destruction in 1258, thousands of literary figures passed through the heart of the Islamic empire and enriched our common heritage.

But why would a caliph, whose empire stretched from the borders of India to North Africa, be so concerned with the trifling matter of poetry? Because al-Mansur understood the power of language. He came from a tradition where words uttered by men could mean life and death; for in the harsh climate of Arabia where one might bite into the bitter colocynth to stave off hunger, traverse vast distances for pasture, and fight men whose ancestors had insulted yours – the word was the only thing that was valued. This portable capital could, if recited to a king or patron, earn one honour, fame and gold. A vitriolic insult set to verse could gain victory even before swords had clashed. A wrong turn of phrase on the other hand, could be your last as the case of the famous Mutannabi (915-965) showed. He was killed by a tribal leader whom he had previously lampooned. Hence, al-Mansur understood that sticks and stones didn’t break bones but words certainly did. The Abbasid revolution had started with people reciting invective verses against the Umayyad dynasty and ended with his brother al-Saffah, ‘the blood shedder’ seizing the Caliphate by massacring the whole clan at a banquet. Al-Mansur knew he had a problem of legitimacy and in true Arab fashion put forward the poets to propagandise the right of the Abbasids to rule.

Consequently, it was Abbasid patronage that created a climate where poets flocked to Baghdad in order to harvest the fruits of Abbasid generosity. Whilst these poets and litterateurs were far from being paragons of virtue, they excelled in verse, created new poetic forms, contributed to philology and literature, thereby inadvertently preserving the linguistic miracle of the Qur’an. Thus when al-Hatimi, the courtier and literary critic, turned up at a salon in Baghdad in 963 where the poet Mutanabbi was giving lessons to his students, what resulted from their heated discussions was a clarification on the meaning of hyperbole and metaphor, which ultimately furthered our understanding of the Qur’an. Even when poets exchanged insults they preserved the ingenuity of the classical language. To illustrate this, when Jarir (d.728), the famous Umayyad poet insulted his rival, al-Farazdaq (d.730) by attacking the virtue of his sister, Jarir forgot that he was from the tribe known as Banu Kulayb (loosely translated as ‘the sons of the puppies’). And although classical Arabic does not possess any words of profanity, al-Farazdaq responded with verses that ran on the theme of dogs: bitches and their puppies. Whilst comic, this famous exchange is to this day studied in order to comprehend the sheer complexity of the Qur’anic language.

It is true that scholars of the time warned against the wordsmith, but in spite of their irreverent personalities the scholars recognised that there was genius in some of these artists. They appreciated that Bashar ibn Burd (714-784) may have been obnoxious, but he was a great poet especially considering that he was blind from birth. They acknowledged that the language of the Qur’an could be preserved in the unlikeliest people and so continued to study them. And whilst modern Arab poets have done well to draw inspiration from Western literature we have preferred to ignore some of the most remarkable achievements in world literature.