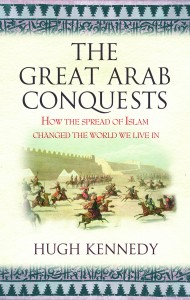 Western historians have always found it difficult to explain the ‘enigma’ of the early Muslim conquests. Firstly, since Providence no longer has a place in Western academic thought, how does one account for the fact that a small army, no better in terms of equipment or martial valour, could achieve such relentless expansion in such a short period of time? Secondly, how was it that these conquests achieved such a degree of permanence when other nomad empires like the Mongols for example, did not? Thirdly, how does one interpret sources that not only differ in terms of language, but are often contradictory, follow different conventions, and possess different world views? And finally, how does one write a book that is academically rigorous and yet accessible to the lay reader? It is no wonder that few historians in recent years, have attempted to write a book on the subject.
However, Professor Hugh Kennedy, an Arabist formerly of St. Andrews University, currently Professor at the School of Oriental and African Studies and a Fellow of the Royal Society of Edinburgh is perhaps best suited for such a task. His publications have dealt with the Early Caliphate, Abbasids, Muslim Spain, Byzantium, Crusaders, Mongols and Vikings. He has also travelled extensively in and around the regions that he writes about. In his book, The Great Arab Conquest: How the spread of Islam changed the world we live in, he incorporates his encyclopedic knowledge of the Muslim world and produces a balanced book accessible to the lay reader and academic alike.
The Great Arab Conquests starts with a discussion of the Prophet and the ideological basis for expansion. Then it covers the conquests geographically: Greater Syria, Iraq, Egypt, Iran, North Africa, Central Asia, Spain and Sind. He includes a helpful section on sea warfare and the responses of the conquered population. He concludes that the speed of conquest was partly due to the decay of the empires of Late Antiquity on the one hand, whilst unity, good morale and leadership were pivotal in explaining the phenomena of conquest. The book has helpful maps, photographs and an extensive bibliography and chapter notes.
The Great Arab Conquests is thankfully not an endless catalogue of numerous battles and dates. Rather, Kennedy’s narrative is peppered with analysis, discussion of sources, and lively anecdotes of individuals which give the reader an insight into the mentality of the conquerors. For example, he spends a considerable time on the tragic downfall of the commander Muslim bin Qutayba, not only because it is an interesting tale but it also illustrates the complexity and problems that the early Muslims faced. He shows that some fought for God whilst others were worldly men of fortune; that the frontiers were places of fluidity, fragility, of defeat and victory. He shows that the sheer pragmatism of the commanders allowed Islam to establish itself. Thus, the author very subtly illustrates the uniqueness of the conquests and why they were so permanent.
The most refreshing aspect is Kennedy’s tone. It does not possess the superciliousness of some Orientalists when dealing with Islamic history. He does not run roughshod over Muslim tradition and historiography and treats each with respect and candour. It is hardly surprising to find the book translated into Arabic. And although Kennedy’s conclusions do not go far enough and not groundbreaking in themselves, his work still remains a great introduction to the Muslim conquests.