One of the hardest things for a writer is to inhabit a person of historical importance.  Amin Maalouf with a mixture of erudition and eloquence has managed to pull it off with Leo the African; so successfully, that it becomes difficult to distinguish between fact and fiction.

Maalouf’s novel is the story of Hassan ibn Muhammad Al-Wazzan Al-Fasi or as he is known in the West, Giovanni Leo Africanus. He was born in Granada in 1494,  but his father took his family to 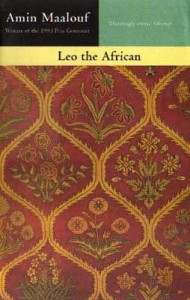 Fez after the city’s fall. In Fez, he received a first class education at the Qayrawan University and had the fortune of being attached to his maternal uncle, an ambassador of the Marinids.  Accordingly, he undertook diplomatic missions to various parts of the world including, it is said, sub-Saharan Africa, Egypt and Constantinople. It was on one of these journeys that he was captured by corsairs and came under the services of one of the Medicis, Leo X. The Pope, recognising his pedigree, immediately manumitted and baptised him. Consequently, the polymath spent several years wandering the length and breadth of Renaissance Italy, translating medical treatises, writing a grammar of the Arabic language as well as a geographical description of Africa. His geography of Africa not only illuminated parts of the world that Europe had not seen but also gave birth to Shakespeare’s Othello. For it is in the book’s footnotes that Shakespeare and indeed Maalouf gleaned the facts of his life. After the sack of Rome in 1527, Leo returned to Tunis where he reconverted to Islam and passed away.

The novel is divided into four parts: The Book of Granada, where as a young boy, he remembers the occupation of his city by the forces of Ferdinand and Isabella; The Book of Fez, which tells of his life in exile, where he matures into a young man, and experiences the first taste of love and strife; The Book of Cairo, revolving around his love affair with Nur, a Circassian and finally, The Book of Rome, far more reflective in tone, which tells of his capture and his friendship with the Medici family, marred perhaps by his run-ins with a few Renaissance painters and his return home.

Whilst these run-ins can border on the contrived, as a whole there are so many memorable passages  that they can be forgiven. From the loving description of Granada, the ranting of Astaghfirullah, the misery of the leper colony, the cowardice of boabdil and so on; all framed within the beautiful eloquence of a bygone age.  Maalouf is truly an author who understands loss and separation.  Moreover, his ability to understand Islam and Christianity as if an insider, and yet being able to transcend both is remarkable.  This book is about a mighty soul both as protagonist and author.