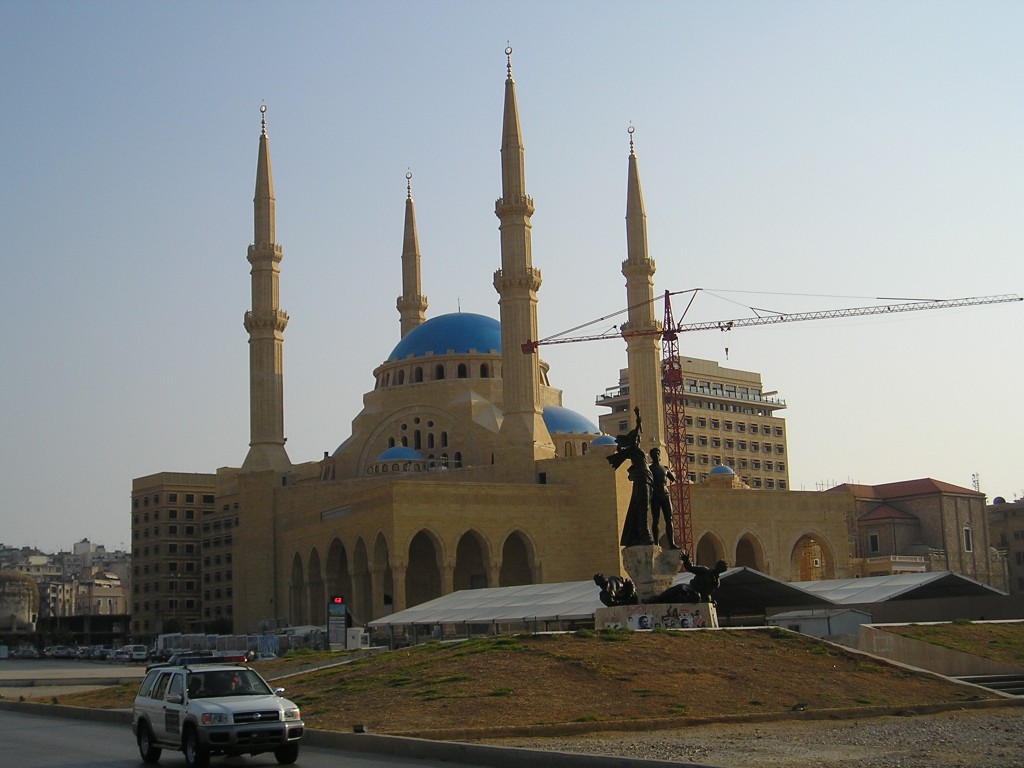 Lebanese society is a surreal split amongst class, sectarian, and ethnic lines. This is a country where Basketball teams are financially supported by political parties.  Where Hezbollah flags fly unashamedly defiant, where pictures of an austere Khomeini serving tea hang on café walls whilst Fifty Cent raps on the radio. Here opening a bank account requires you to declare your sectarian affiliations. Here your ID cards state whether you are Druze, Alawite, Armenian Orthodox, Maronite, Sunnite, or Shi’ite. Here politicians fear a census because it could reveal the decline of the Christian population and the  rise of the Muslim, which could upset the fine political balance based on confessionalism.  It is almost inconceivable how this tiny country survives.

And yet Beirut, like its inhabitants, is undergoing frantic cosmetic surgery. Everywhere the noise of its large scale building projects pervade. Super sleek cars whizz past testifying to Lebanon’s economic success. Beautiful people, sit in down town cafes relaxing apparently happy. There is a sense that Lebanon has moved on from the civil war days that ended properly in 1991. But  step into a taxi and the driver might make a salutation on Ayesha, one of the wives of the prophet, revered by Sunnis and hated by Shi’as in order to ascertain what sect you are from. Yet that same mustachioed taxi driver will insist on his honour that faith is a personal matter. True, it is not strange to hear a Druze quote a verse from the Quran or a Christian send blessings on the Prophet Muhammad when an argument ensues but underneath the veneer of religious individualism and tolerance, religion still dictates where your politics lie. A case in point is when the Danish cartoon row occurred. The depictions of the Prophet Muhammad revealed the tensions that still remained in Lebanese society. Following the burning of several Churches by religious extremists, Christian communities up in the mountains surrounding Beirut took up arms. Local demonstrations escalated alarmingly, Lebanese Christians began randomly stopping and assaulting any driver with a Muslim name. It was, as a friend told me, a dark reminder of the civil war.

During my stay at a hotel in the centre of the city I met Samir, a twenty one year old Beiruti, who described himself as a whoring hard drinking young man. But though forward about his hedonism he was much more reluctant to reveal that he was a Druze and a bad one at that; because Druzes aren’t meant to be living such a debauched life. His initial hesitation in revealing his sectarian leanings prompted me to ask him about inter-sectarian relations in Lebanese society.  Lighting a cigarette Samir said that he felt that his community were suspected for their strictness and secrecy.  Despite the Druze community in Beirut appearing very cosmopolitan, he sensed the disgust that some members of other religious denominations felt towards his community. And despite having grown up in Beirut all his life he felt the safest when he was in his ancestral village high up in the mountains of South Lebanon. And Samir does have cause to feel apprehensive, on my way to ancient Jubail or Byblos, I asked my chain-smoking Shi’a taxi driver about his opinion of the Druze, and he declared in exasperation: ‘the Shi’as are free of what they (the Druze) do!’

Samir’s politics followed the general line of loving the late prime minister, Rafiki Hariri; he had after all helped over thirty thousand Lebanese get a university education both home and abroad. He respected the leader of Hezbollah, Nasrallah, because he resists the Israeli occupation. But his allegiance laid with Walid Jumblatt, inheritor of his father Kamal Jumblatt’s PSP socialist party, the effective political vehicle of  the Jumblatt family and the Druze community.  Samir’s reasons for supporting Jumblatt, apparently, was his staunch socialist and secularist agenda and his defiance of Syrian political intervention in Lebanon.  Despite the availability of better candidates who proposed an equally robust political agenda one could not help feeling that despite his sophistication, Samir, still returned to his family and clan like his forefathers had; and like them he showed undying loyalty to their traditional leading families even if, as is the case with Walid Jumblatt, they were technically no longer part of the Druze community. For according to Druze lore, Walid Jumblatt apostatized when he married outside the Druze community. In Samir then, I got a flavour of how the traditional ‘Zu’ama’ or the Patronage system worked.

Samir’s choice was very typical of the mechanics of the ‘Zu’ama’ system which Lebanon unofficially runs on. It is a system based on networks between distinguished families or ‘Za’ims’ who by merit of their wealth, connections, education and historical tradition rule their communities’ affairs like little Medicis and Corleones. The protection that they provide their clientele or community is reciprocated by unblinking loyalty to these families. Thus whilst other countries entered the twentieth century and tried to free itself of oligarchy, in Lebanon old ruling families remained because its followers made sure that they existed to protect their sectarian interests.  And so in this democratic country sons inherit the political power of their fathers. Here brothers take over the political mantle of their brothers as did Omar Karimi when his brother Prime Minister Rashid was assassinated in June 1, 1982.

Unfortunately this makes Lebanese politics extremely Machiavellian, where parties vie with each other to secure the best deal for their community. Sometimes these groups will use Mafioso style tactics to extract loyalty from their clients. Other times support unofficial militias in order to gain the best result for them and their community. It can make Lebanese politics go from stagnation to periods of extreme volatility. Gains for winners can be very high resulting in great resentment from the losers which in a community split along sectarian divisions at best lead to tension and suspicion, and at worst to terrible bloodshed and killing as witnessed during the civil war.

I couldn’t help asking myself why such a divided nation survives?  What was the glue that gelled this disparate communities together? One thing was certain: it wasn’t community spirit. Beirut’s old buildings stand peppered with bullet holes to remind you that the civil war could easily happen again. But if it is not shared community feeling what was it?

The answer came when I walked past the HSBC building standing next to an old bullet ridden building. An expensive Mercedes pulled up to the bank, out stepped a well dressed man in his late forties playing with some rosaries in his hands. There was a Quran on the dash board of his car, he was Muslim. Then presumably, his wife stepped out.  She was a remarkable middle aged woman with suspiciously firm breasts and very very full lips;  round her neck rested a gold cross. She was playing with her Louis Vuitton bag. That’s it I thought: it’s money.

After Prime minister Rafik Hariri’s assassination the first few days witnessed a run on the Dollar in Lebanon. It appeared that the demonstrations that ensued might lead Lebanon down the road of anarchy. But in truth there was never a question of that. The leading banks immediately reassured the Lebanese and the world that the economy was still booming and this was a good place to do business.  It was as if they were reminding everyone that a civil disturbance let alone civil war would be extremely harmful to profits. Lebanon would lose the investments from the Gulf countries that now prefer them over the US and Europe. Billions would be lost in revenue from the tourist coming from all over the Arab world. The leading families together with foreign companies who owned the seventy or so banks in Lebanon realised that they were making far too much money to allow sectarian strife to destroy their profits.  Ironically it was the Zu’ama system which actually saved the country from falling into chaos.  For these leading families and the nouveux rich were now so firmly entrenched in the reconstruction of the economy that it would be a disaster for them financially and their communities to enter into serious sectarian infighting following Hariri’s assassination.

Politicians in Lebanon are unashamedly pro-business and have no problem in declaring their vested interest in the reconstruction of Lebanon. The late Millionaire Rafik Hariri was just one such example. Hariri and his family increased their wealth since coming to power. They audaciously profited from the reconstruction of the country increasing their property holdings, construction firms, media companies and banking interests.  But at the same time the Hariris shared their wealth and gave other leading families a stake in the country. One such example is Fouad Siniora, the chairman of Group Méditerranée,  the banking holding company of the Hariri family, he became Lebanon’s Prime Minister after Hariri’s death. In some ways Hariri’s efforts tied these Za’im families to the booming economy and made squabbling over religion an unprofitable proposition.

Just how the Zu’ama system unites is illustrated by the collapse of the Madina bank in 2003 due to the grossly fraudulent activities of their Druze owners. Despite the uproar and criminal allegations against the owners of the bank, the problems were all settled out of court with very little fuss raised by the central authorities.  Revelations by leading national papers indicated how many people benefited from the scandal. Everyone seemed to have a stake in the money laundering from Iraqi Ba’athists, Islamic banks, Syrian officials and business families of various denominations. The extent of how many pockets the money laundering of the Madina bank was lining was indicated by the silence of senior banking figures and political allies of former President Emile Lahoud; and the harassment of the media companies that were pressing for greater transparency.  The cover up seemed to go beyond sectarian lines all in order to protect profits and the family network. It was testimony of how effective family connections can be to protect their interests and how they could be used to keep sectarian strife at bay.

Thus in Lebanon wealth can unite and the proof was everywhere after all amongst the moneyed in the bars around Down Town there is no distinction between the various sects. They are all well dressed, drinking, smoking, and wearing the same Top Gun Shades and sporting the same Gucci bags. Here in Down Town Beirut even Che Guevara can be appropriated, in one of the trendiest bars dedicated to the revolutionary affluent couples sit drinking wine and continental beers.  His face a stark reminder of the marketing phenomenon of the great revolutionary. While Che must be cringing in his grave these sons and daughters of capitalists must have realised that only the making of money can avert revolution and sectarian strife.