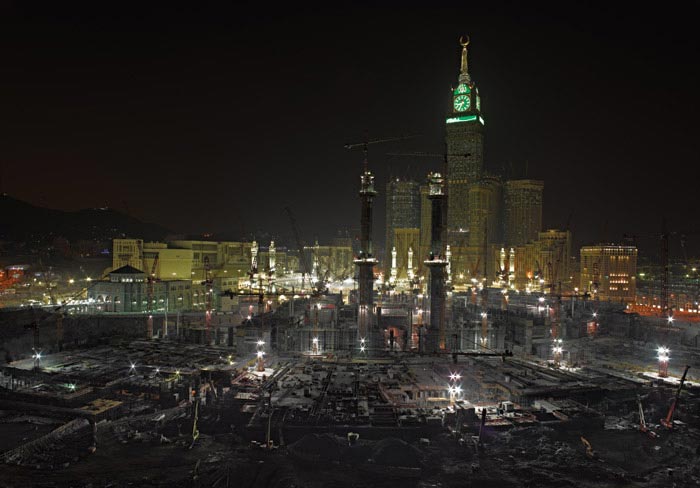 The article appeared in the New Statesman 5 October 2012.

The #COMETOGETHER exhibition opening in London’s Brick Lane may be about modern and contemporary art by Middle Eastern artists, but it is also about how revolution has affected seemingly stable Gulf States.   As Stephen Stapleton, organizer and founding member of Edge of Arabia points out: “In bringing these artists together at this time we want to explore the frontiers of technology and ideology that are shaping the contemporary borderland between East and West.”  The case of Saudi poet and columnist Hamza Kashgari who published a conversation with the Prophet on his twitter account is illustrative of Mr. Stapleton’s point.  Saudi Arabians were divided as to how to deal with him crossing red lines.

The #COMETOGETHER exhibition then, reflects and explores the fissures and cracks that the Gulf States are experiencing. The art of Ahmed Mater focusing on the huge changes that Mecca is experiencing is a good example. The investment and the rise of high rise hotels have wiped out the archaeological heritage of Islam’s founder. It has in the words of author Henry Hemmings caused a sense of dissonance.  It’s hard to focus on the House that Abraham built for God when halal Big Macs, Dr. Dre headphones and Ann Summers lingerie calls you within a huge clock tower that resembles a cross between Big Ben and the tower of Mordor. Whilst none of the latter is sinful of course; Mecca’s worldliness has disturbed many Saudis and has no doubt contributed to shaping the world view of many radicals.  The kingdom has lost the spirit that it was initially founded on. #COMETOGETHER not only explores the discord between Gulf States and its citizens but also reflects how the Gulf States are trying to adapt to their new environment.

Admittedly the Gulf States are not adapting very well.  Saudi Arabia has dealt with the Arab spring through a combination of repression and pay rises.  It is still somewhat unsure about what it should do with petitions like that presented in February 2011 which asked for a state based on institutions and rights. These were signed by thousands, not just islamists but by a younger generation willing to challenge religious authority.  Oman, described as the world’s most charming police state, has similar problems. Since Sultan Qaboos seized power in the 70s, Oman has been staunch ally of the West. With the Arab spring compounded by the fact that the sultan has no designated heir and oil resources are declining; Omanis are becoming increasingly restless. Dissent has been expressed through social media sites and protests in the oil sector. Kuwait and United Arab Emirates have also seen its Islamist parties gaining confidence. As a recent Chatham house paper suggests the authorities view the Islamist’s manifesto for democracy as a veiled attempt to gain power.

So what course of action should the Gulf States adopt in order to avoid instability? It cannot adopt a Bahraini or Syrian attitude. Neither can it think short term and do what the Saudi king or the Omani sultan did: pay rises, release political prisoners and remove some ministers.  In order to survive fundamental changes need to occur. Political reform probably in the form of constitutional monarchy must happen with real accountability. Strategies that deal with the post-oil economy and bridges the socio-economic cleavages that the region is experiencing must be implemented.

As for the West, how can it ensure stability yet maintain good relations with these Gulf States? Britain’s good relationship with the Gulf States can prove instrumental in managing these relationships. Encouraging educational contacts through scholarships or British universities expanding in the Gulf help create an alternative political culture. Cultural contacts like #COMETOGETHER strengthen relationships with the younger Arab generation and allow them to create their own political role models.  Oman for instance, is bringing award winning British Graffiti artist, Aerosolarabic this December to change young Omanis’ penchant for fast and furious driving and pimping up their rides. Cultural contact is the best medium for future political reform and dialogue. #

#COMETOGETHER opens at the Old Truman Brewery, E1 6QL, on 6 October at 6pm