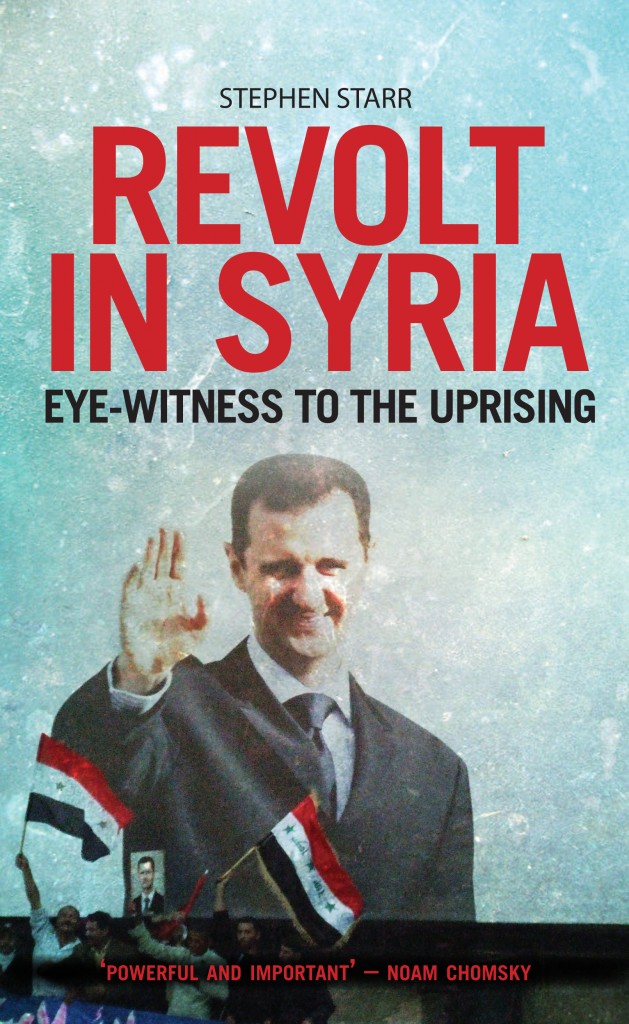 Review appeared in the New Statesman July 2012, reproduced with kind permission.
Having lived in Syria for several years, I have always been sceptical about the coverage of the uprising. This is partly because the analysis often seems disconnected from the reality on the ground. There are Sunnis who will die for Assad, just as there are Alawis who have joined the FSA. These voices are not heard because information is disseminated through a tech-savvy opposition and because journalists and “experts” possess only cursory knowledge of the country’s political and social topography. Stephen Starr is an exception. His book is the only account that gives previously unheard voices a chance to be heard.

Starr was a colleague of mine, and is familiar with the sectarian and political milieu in Syria better than anyone I know. He has spent five years in the country, marrying into Syrian society – if there is one Irishman that the Syrians would describe as muta’rrib, “Arabicised”, it is him. His local knowledge is excellent. The fact that recent protest should stem from Midan is unsurprising; as he points out, it’s a place for delicious grilled meat but also a conservative Sunni stronghold. He knows that First Cup, a plush café in Mezze, is a pro-government Alawi outfit, just as he is able to distinguish between Damascene and Lattakian accents in order to ascertain a person’s sectarian affiliations. It’s the sort of texture you need to understand Syrian society better.

Through a series of vignettes and anecdotes, Starr, editor of Near East Quarterly, provides us with a plethora of voices from minorities: Sunnis, Shias, Kurds, Palestinians, pro-regime and anti regime Syrians. What becomes clear is that Syrian society is riven by fault lines that are not insurmountable, though the media likes to portray them that way. Rather it is the Alawi government which stokes sectarian tensions to strengthen its own position.

The book is a witness to a dilapidated regime. Starr shows us the workings of a government bureaucracy that enslaves its employees through subsidies and low pay. It makes obtaining a permit into a Kafkaesque experience. Sometimes it is not money that does the trick, but presenting a bit of madlu’a, Syrian sweetmeats, to one of the officers. Such techniques can eliminate all the paper work in an instant or make your passport into a door stopper; Starr captures it all brilliantly.

His account gives one a sense of the paranoia that seeps into your very being. Starr changes passwords daily, reports to the local mukhtar, informs theMukhabarat, the secret police, takes his cell phone batteries out so they can’t listen; the system has gnawed away at him.  At his book launch last week, Starr told me I had been too conspicuous to the Syrian security services; but trying to study classical Arabic forces you to be. In order to master it you had to go beyond the University of Damascus and the young Alawi language teachers with poor grammar, and sit with master grammarians under house arrest venting their vitriol. Of course you had to pay the price. In the eyes of the Mukhabarat, if you possessed an Arabic name and studied classical Arabic you were either a Muslim Brother, Salafist, a spy or anti-regime. Why else study Arabic? A random phone call instructed me to attend an interview. How do you prepare for such an interrogation? Ask Starr: bring out yourwasta, someone who can vouch for you. My wasta was a former advisor to Hafez Assad. I never got any trouble from the secret police after that. Ironically, it was also this same wasta who had kept my Arabic grammarian under house arrest.

The book’s only flaw is that it barely touches on the role of the ulama, or clerics, in Syrian society. Only Thomas Pierret’s Near Eastern Quarterly article, “The Role of the mosque in the Syrian revolution”, and a recent Royal United Services Institute presentation by Shaykh Muhammad al-Yaqoubi, a Syrian opposition scholar, have discussed the pivotal role that 10,000 clerics play in shaping Syrian society. Notwithstanding this oversight, Starr’s book is not only an important contribution to the uprising, but also a sometimes terrifying account of the Syrian police state.