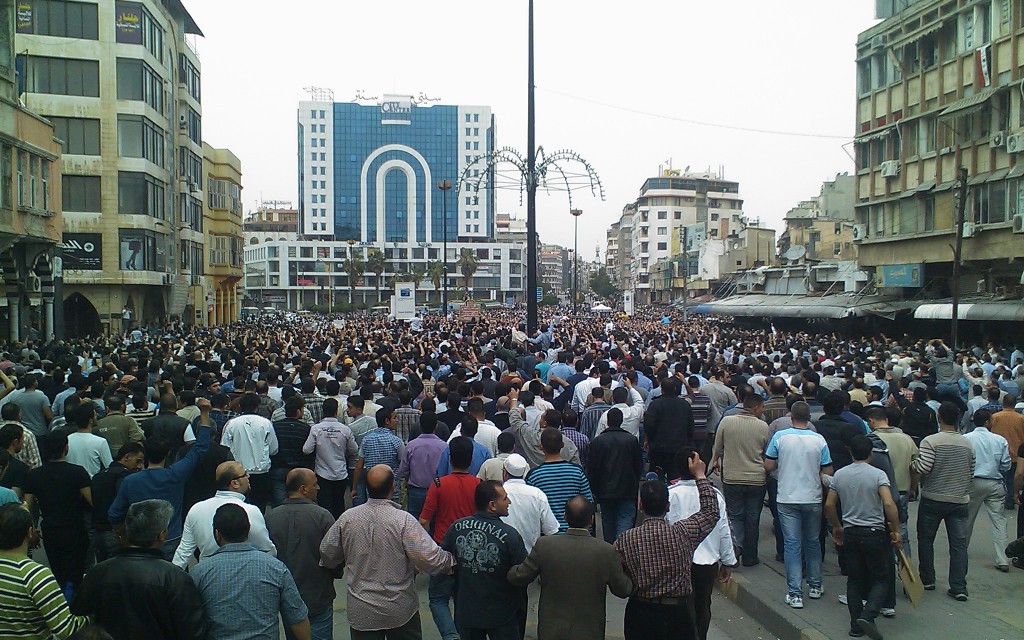 Article was published in June 2012 by New Internationalist. Reproduced with kind permission.

An encounter with a Syrian security official revealed to Tam Hussein just what is at stake in the current conflict – and how attempts at resolution are missing the obvious stumbling block.

In 2008 a random phone call ordered me to the headquarters of the Syrian security services in Damascus. When my Syrian acquaintances learned that Abu Hyder, an Alawi intelligence officer, had interviewed me, they stared at me in disbelief. In the experience of these Homsis and Hamawis (as people from Homs and Hama are called) those who went in rarely came out. But for Western students like myself these sorts of interviews were standard procedure; visits from intelligence officers were common when too many lectures were missed. What my fellow students did not know was that the interview had been about them. The intelligence officer suspected them of being part of the Muslim Brotherhood and I was spending far too much time exchanging English and Arabic with these undesirables. The experience made me realize the deeply entrenched sectarian positions which policymakers must take into account before formulating a response to Syria’s running crisis.

Of course, Abu Hyder never let on that our interview was about the suppression of the Sunni majority. The rhetoric was about the maintenance of the integrity of Syria. ‘Syria was the third-safest place in the world for a reason,’ said Abu Hyder, a middle-aged bumbling Columbo. He joked about his country while his colleague, another Abu, knelt on the floor boiling loose tea on a gas stove, reminiscing about his days as a tennis coach. I was even privy to pictures of Abu Hyder’s family and the other Abu’s tennis shorts and racquet. Both talked about family, pan-Arabism, and memories of their village in the coastal idyll of Lattakia. The trivialities were interspersed with questions designed to ascertain the political inclinations of both myself and the friends I conducted my language exchange with. When I mustered up the courage to ask what the issue was, I was told that I was being ‘radicalized’ by these students. Abu Hyder made it clear that any form of political activism that questioned the regime was unacceptable. That was hardly surprising: Abu Hyder would lose just as much as the regime would if it fell. I suspected he would fight tooth and nail to maintain the status quo: Alawi hegemony at the expense of the Sunni majority.

Abu Hyder was the archetypal rural Alawi and had reaped the rewards from the ascendancy of the minority regime. His generation still remembered the contempt that some Sunni families had for the Alawi community. Some Alawis recalled a time when Alawi families were used as indentured labourers. They were the gypsies of Syria, viewed with a mixture of contempt and suspicion. And Alawis, even the religiously uninitiated, are well aware of how the majority of Muslims, both Shi’a and Sunni, regard them: as heretics and infidels, due to their syncretic and heterodox beliefs. In the past, this had resulted in pogroms. In 1936, Suleiman, the grandfather of Bashar al-Assad, explained the Alawi community’s predicament to Léon Blum, France’s first Jewish Prime Minister: if Islam takes root, the Alawis would be driven into the sea just like the Jews. Suleiman’s pronouncements have a grain of truth: the Alawi-led uprisings of 1946, 1952 and 1954 were swiftly crushed by the majority. Though Syrian Sunnis don’t seem to be of a genocidal bent, the views of some Gulf clerics who declare the Alawis infidels are unhelpful and fuel fears of extermination. Thus the Alawi regime’s siege mentality continues, with only Alawis finding favour in the state apparatus.

The fear of extermination has to be addressed if a lasting solution is to be achieved, because it has led to a group solidarity that encourages Alawi dominance irrespective of merit. Had it not been for the regime, Abu Hyder would have stayed in the picturesque mountain village of Lattakia. But, as a result of independence in 1946, the pan-Arab government’s attempt at incorporating the disparate Alawi communities in rural Lattakia and the Homs plain resulted in Alawis enjoying the fruits of education and military service. Sunni families viewed military service as a job for the feckless and turned away from it. Like many minorities in Syria, the effect of increased literacy among the Alawis also resulted in political activism; theirs inclined towards the secular vision of the Ba’ath party. By the 1960s they had a significant bloc in the military as well as the Ba’ath party and they discovered a group solidarity or Asabiya that could not be formed in the remote mountain villages of Lattakia.

This Asabiya resulted in a minority-led Ba’athist coup on 9 March 1963. The Alawis then outmanoeuvered rival communities, such as the Ismailis and Druze community, in order to establish control. During 1966-70 General Salah Jadid consolidated the Alawi position by securing their powerbase at the expense of the Sunni majority. Cronyism became rife; government and international contracts were given to co-religionists. One example is Bashar al-Assad’s maternal cousin Rami Makhlouf, who dominates the Syrian economy with interests in oil, gas, real estate and telecoms and virtual monopolies in other industries. The region of Lattakia has seen a disproportionate level of investment in comparison to the rest of the country. It has even led to the little port city of Lattakia possessing an international airport. This blatant favouritism has resulted in the little man from the Lattakian village being preferred over his Sunni counterparts in the urban centres of Damascus and Aleppo. Thus the fate of men like Abu Hyder became intertwined with that of the regime.

So when you hear Bashar’s crack troops chant the president’s name, know that it is heartfelt. The Syrian government’s argument that without it the country will fall into sectarian chaos is wrong, for it relies precisely on this sectarian division. Ultimately, the strength of Assad’s regime is not because of its sophisticated military possessing Russian hardware, its ruthless intelligence service, or Iranian support; it is because Assad’s community believes that their destiny is tied to his. For them, the current conflict has no room for half measures.

The regime’s ruthless hold on power has trampled on the lives of many. Shaykh Khaled, a private tutor and linguist, is a good example. He was a secondary school teacher in the 1970s and benefited from the regime’s good relations with post-independence Algeria. As an ardent advocate of Pan-Arabism, Syria sent educational delegations to help Algeria purge the Francophile influence from its schools. Shaykh Khaled reaped the rewards of this Arabization. However, among his acquaintances was a Muslim Brotherhood member. In the crackdown of 1982 that culminated in the destruction of Hama, the regime arrested and imprisoned anyone in the Muslim Brotherhood and anyone associated with them. His name was mentioned. ‘Syrian intelligence officers broke my back and killed the flower of Syria’s youth,’ he said in a voice devoid of emotion, the tears rolling down his cheeks betraying the horrors of his experience. He told me that friends hid under large Ottoman beds while their wives were raped by security personnel. Shaykh Khaled remains under house arrest and although he was never part of the Muslim Brotherhood, he has become an ardent supporter.

This sense of injustice is even stronger in the new generation of Sunnis. In conversations with students from Homs and Hama, their anger at thwarted ambition simmered. They were far more educated and ideologically driven than their predecessors. Ibrahim, a 23-year-old economics student, expressed frustration that he has to play the stock market using proxies and addresses in Jordan. Religious students, though pleased that there is space for religious institutions, know that they can only profess a quietist non-activist variety of Islam. For some, like Menhal, a 28-year-old student of theology and an entrepreneur, this is unacceptable. ‘This regime,’ he said, ‘has got nothing to do with pan-Arabism or Palestinians – they have no love for Islam.’ He was desperate to escape the two-year compulsory military service. ‘I can’t pray there,’ he said. ‘I don’t want to clean the boots of Alawi officers who look at me with contempt.’ He echoed the slogan of the Muslim Brotherhood in 1982: ‘For me it’s either God is Great or the Ba’ath party.’ Last I heard, he had vanished.

This generation has no illusions about the regime. All know that their activities will always be monitored by the Alawi minority. Ironically, the Alawi regime’s oppression has resulted in a generation of Sunnis more unified than ever before. It is not surprising that the present conflict should see Sunnis from Salafi, Sufi and secular persuasions uniting. The Muslim Brotherhood, though underground in Syria, is not short of willing recruits.

To bridge the chasm

I received an email recently from Homs, from one of the Syrian students that I had a language exchange with. He said that he wakes up to the sound of shells; he doesn’t know whether he will live or die. But he is happy because he is free; for him and many other Syrians there is no going back, no half measures. Similarly, the ruthless suppression of this uprising that has resulted in the deaths of over 9,000 Syrians shows the behavioural pattern of an establishment fighting not just for its privileges but for its survival. And that is the point: these are entrenched positions that cannot be resolved just by taking sides. However repulsive it is to inspect the motives of such a ruthless regime, one must address their unspoken fear: that their community will be driven into the sea by the majority, once in power.

Any solution must involve the placation of these fears. The Friends of Syria group and the international community at large should draw lessons from other conflicts dealing with deeply-rooted positions. Apartheid South Africa is a good example. Nelson Mandela, in his struggle against the minority Afrikaner government, engaged the regime despite its distasteful policies. He allayed their fears and yet remained utterly convinced of the rightness of his moral position. Similarly, the Friends of Syria and policymakers must be deeply conscious of the sectarian milieu of Syria and transcend feelings of revenge and suspicion to offer an inclusive vision which incorporates a rainbow nation of Sunnis, Shi’as, Druze, Ismailis, Christians, Kurds, Armenians and Assyrians and so forth. It needs to give each a stake in the future of Syria, which means allaying the fears of Abu Hyder and offering him a way out, and understanding the hurt and pain of Shaykh Khaled. Meanwhile, Syria’s neighbours could tone down the incendiary religious rhetoric. Mandela’s strategy worked in South Africa and could, if the political will is there, do so in Syria. If it does not, then the prospect of a prolonged bloody civil war could destabilize the whole region or see the birth of a small secessionist Alawi state in the mountains of Lattakia – with an international airport to boot.