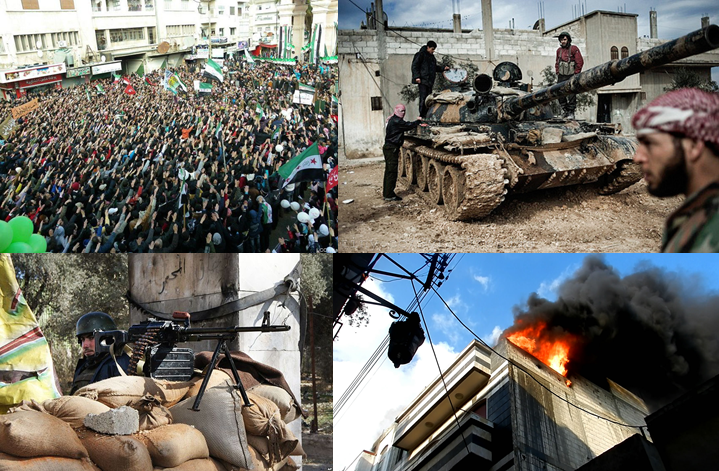 This article appeared in the Huffington Post in New Year’s Eve 2012.

Muhammad Ra’d is not your usual Syrian FSA soldier. He doesn’t wield guns nor wear combats. Yet he is the embodiment of his nome de guerre, Abu’l Huda; the father of guidance. To the FSA, him and his likes, are what Pravda was to the Bolsheviks, an information resource that bypasses the official narrative of the regime. Abu’l Huda has the ability to coordinate, attract funding and by showing the atrocities of the regime undermine its legitimacy to all. He provides compelling reasons for the International community to act.

If Abu’l Huda is caught he will be treated like a sniper, no quarter will be given. Only recently seven social media activists trying to reach a satellite communication device were executed on the spot by the regime. The brigades value their sacrifice. When Muhammad I’lami, the social media activist was killed whilst filming he was accorded the same burial rites as a soldier who is killed in Holy War. Muhammad I’lami was considered a martyr and an intrinsic part of the military struggle.

Abu’l Huda and other social media activists are mini information hubs that undermine the propaganda of the regime. His broadcasts on YouTube and Facebook is a ticker tape of the tragic story of Syria that has claimed over 40,000 lives. His typical Facebook page is compendium of horror; of boys with haunting stares and severed limbs, of doctors treating those riddled with bullets, of dead regime commanders, of soldiers being slapped of their chairs because they raped girls and of regime soldiers changing sides. Abu’l Huda’s information is so powerful that the victory signs of Assad’s soldiers seem like empty gestures. He gives those who have yet to choose sides the message that the FSA will be victorious.

Because of these tech-savvy soldiers ordinary fighters who were once farmers, machinists and small time vendors have become social media literate. No matter how dangerous their military operations are they give these activists what they need. So the commander of Ahl-Athar brigade prepares to take on a military airstrip, but before that he gives an interview suffused with religion that simultaneously frightens the West, attracts funding from the Gulf and connects him to the afterlife. Similar tales can be told of other brigades like Umar Mukhtar, Usama bin Zayd and Khaled bin Walid. All know that their deeds are going to be uploaded by Abu’l Huda and others. These uploads are shared across the country ensuring that a steady stream of information erodes any vestige of moral legitimacy that the regime has.

Abu’l Huda knows the danger. He is operating from the very fault lines of Sunni-Alawite country. The countryside has shabiha, government thugs prowling the night whilst no less than fifteen intelligence agencies are there to find the likes of him. He tries his best to hide his internet footprint through internet proxies but it is not always easy. He knows that the internet runs because the government prefers to keep tabs on the FSA’s activities.

His posts are evidence of the immense danger that him and his team are in. Yet Abu’l Huda continues knowing full well that him, his family, his friends are all at risk. He’s a marked man and no longer conceals his name. He uploads a post showing three women lined up against the wall and beaten by soldiers. The camera moves to a young man whose back is turned to us, two soldiers kick him in the head. A young woman is grabbed and slapped so hard her scarf comes off. The man wants to go to her aid but is pounced on whilst she is dragged to the other room. One can only imagine what her fate was. I am reminded of a text I received pleading: “if you can’t send us weapons then at least send us contraceptive pills so we can hide our shame”. After the post you realize why Abu’l Huda risks his life.

Ask Abu’l Huda about the West and he is dismissive. He is disillusioned and so it seems are many of these social media soldiers. Recently over sixty Syrian media activists and media organizations accused the International community of reneging on their promises. The most basic satellite communication devices, some costing as little as $600, have failed to materialize or come with too many strings attached. If these relatively inexpensive devices were distributed liberally it could make a significant difference to the struggle. They would be the stinger missiles of the opposition helping to coordinate the uprising better.

However if the West is not willing to supply inexpensive communication devices for the sake of altruism then let it do so for the sake of self-interest. Having the good will of this media savvy and politically astute segment of the Syrian opposition will prove essential in building long term partnerships in post-Assad Syria.