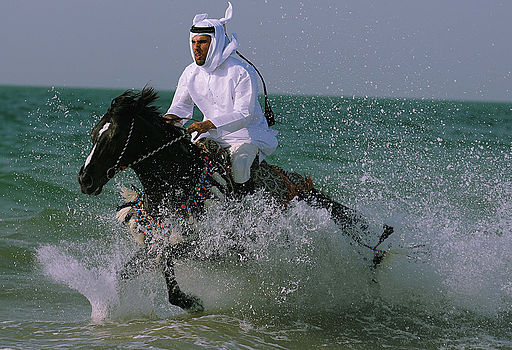 Book review appeared in the New Statesman in December.

There was an expectation that Ibrahim Nasrallah’s first UK book tour, which began last month, would focus on the invasion of Gaza instead of his new book, Time of White Horses, shortlisted for the International Prize for Arabic Fiction. Nasrallah didn’t focus on the current crisis at all. In fact his lecture, like his novel seemed almost out of place considering that Palestinian artistic expression is argumentative, politically defiant and very current. There is always an unspoken need to explain and justify the Palestinian predicament to those who don’t know. A case in point, Rafif Ziadeh’s “We teach life Sir!” came about as a response to a journalist asking her why Palestinians teach their children to hate. Her performance of Hadeel has touches of the Amnesty International Annual report 2012, when Israeli soldiers used live rounds on Palestinian demonstrators killing eleven children. This is not a criticism of Ziadeh; this is Palestinian art’s peculiarity born as it is from struggle. Palestinians, it seems, cannot afford art for art’s sake.

And yet Time of White Horses is exactly that. It is eloquent and lacks that toe to toe feistiness of the socialist writer Ghassan Kanafani, rather it is reminiscent of Nobel Laureate Naguib Mahfouz’s Cairo Trilogy or Rafik Schami’s Dark Side of Love. Nasrallah’s novel spans the Ottoman period all the way up to 1948 with a stoic eye; it is the product of Palestinian memories intertwined with horse lore and history. In essence it is the story of his ancestral village before it was conquered. Nasrallah’s intensely eloquent voice gives Western audiences an insight into the lives of the marginalized without rattling off numbers.

What makes the novel perplexing is that the author’s experience is full of the vicissitudes of the Occupation. Nasrallah is in many ways a refugee statistic, by the 70s he had lived through “seven wars and scores of massacres”. Like many refugees, Nasrallah became intensely political. And yet his political outlook differed from that of the cartoonist Naji al-Ali and Kanafani the playwright. The difference between them and Nasrallah was that the latter’s politics transcended Palestine and encompassed all the wretched wherever they may be. Nasrallah believes that one has to stand by Palestine because it was a test for the conscience of the world and that one’s nationality was determined by the causes one adopts and defends. Whilst the politics of Naji al-Ali and Kanafani came at a price- they were assassinated allegedly by Israeli intelligence- Nasrallah was persecuted by the Jordanian state. He was prevented from travelling for six years, his books were banned and he faced a three year prison sentence for allegedly undermining the Jordanian state, where he lived.

You soon realize the power of Nasrallah’s novel. Any notion that this is just nostalgic reverie is dispelled. For the author, the disappearance of Palestinian identity is a greater danger than the current assault on Gaza. He sees the removal of identity as the greatest danger to a people. It is this that Nasrallah’s novel seeks to redress. In fact this novel is a response to a quote from former Israeli Prime Minister David Ben Gurion concerning Palestinian identity. Gurion believed that Palestinian national identity did not exist because it lacked its own literature, and soon when the old had died and the young ceased to remember, Palestinian national identity would vanish. Time of White Horses attempts to safe guard that identity and though it is not argumentative or defiant, its contribution to Palestinian identity and world literature is just as important.