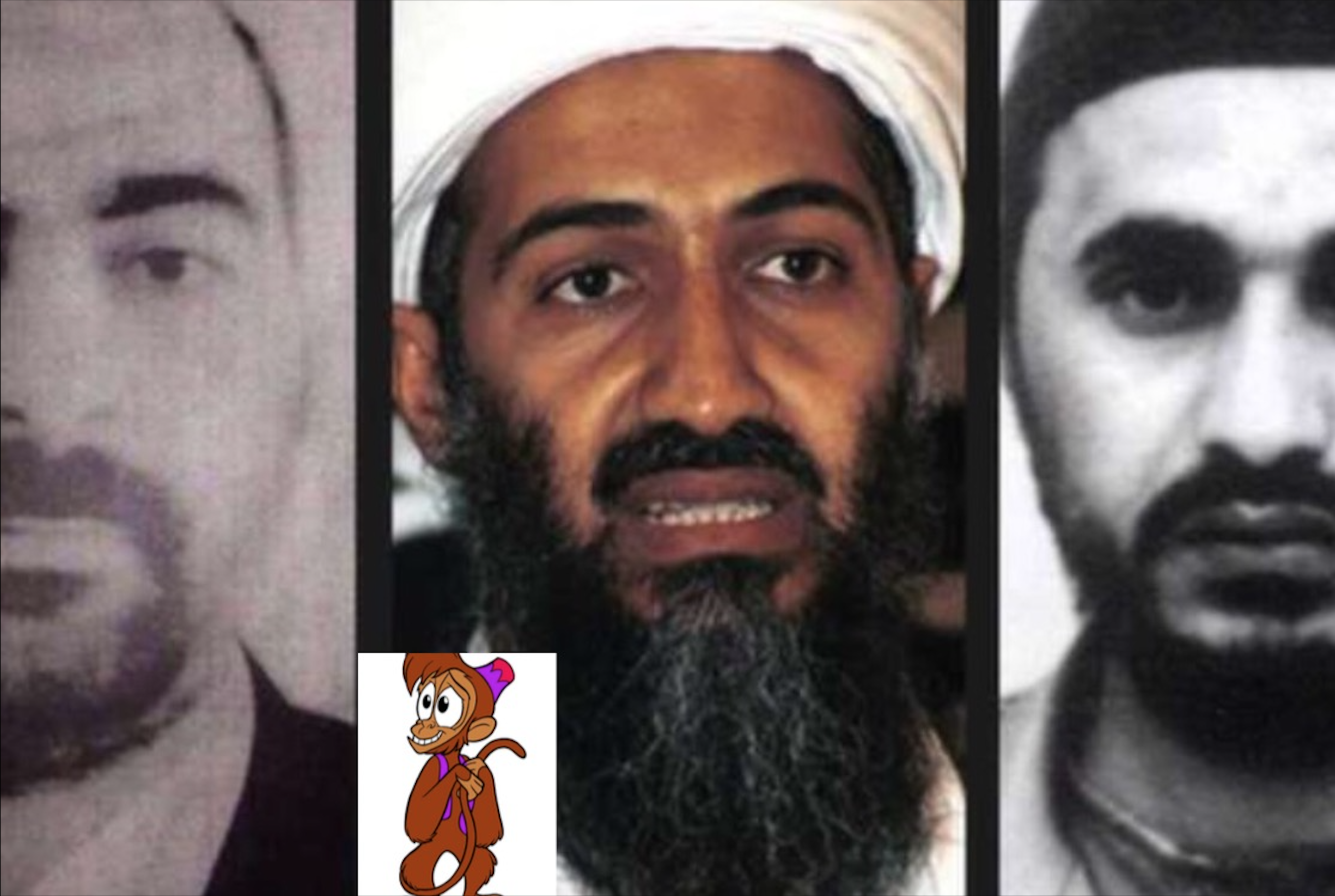 Writing about and covering Muslim jihadi militancy for more than half a decade now, I realise that Westerners, analysts, journalists or otherwise find Arab names extremely difficult to grasp. One of the questions I have been asked countless times by the uninitiated is: why is every single Jihadi militant named after Abu- Aladdin’s pet monkey? That is a genuine question for someone unaware of Arab culture.

Moreover, for the Westerner who is used to having one or possible two names, dealing with a man who has several different names, compounded by the fact that transliterating and pronouncing Arab names are a nightmare makes it even harder. So if one is sitting with a few militants of the al-Qaeda variety in Syria and one is talking about a military commander say Abu Humam al-Shami meaning the ‘father of gallantry, generosity or heroism’ and one changes the vowelling or emphasis of one letter so that Abu Humam becomes Abu Hammam, the ‘father of the heroic’ turns into the ‘father of the toilet’, and one might find oneself in a terrible predicament. Knowing how to pronounce Arab names then, especially when dealing with militants is very important.

It is with this in mind that I thought I would expand on a footnote I wrote for the upcoming book To The Mountains: My Life From Algeria to Afghanistan (Hurst) set to come out in early 2019.

Arab names are extremely confusing for Westerners. An Arab might have several names, let us use examples from the world cup before jumping into a bit a Jihadist militancy. Take Muhannad Ahmed Abu Radeah Assiri, the Saudi Arabian professional footballer, his names gives us clues as to his background in terms of tribe, ancestry, origin and so forth. Here his links to his tribal heritage is very evident. However, contrast Mohammed Salah, the Egyptian footballer his name is a very modern Arab formulation that doesn’t root him to anywhere, Mohammed Salah can be from Chechnya, Egypt or Bangladesh. All we know is that he is a Muslim. No clues are given as to where he is from or who his ancestors were. It is a very generic name, one that reflects the way modernity can disrupt one’s links to one’s past. Contrast this with how people were referred to in days gone by in the Middle East. Take the author of the famous Arabic dictionary Mukhtār al-Sihhah, Sheikh Imam Muhammed bin Abi Bakr bin ‘Abd el-Qader al-Razi al-Hanafi. His name gives you many clues as to his background. He is referred to by his title and profession, Sheikh and Imam, meaning that he is a scholar. This is followed by the name he was given, ‘Mohammed’, then who his father was Abu Bakr, followed by his grandfather, ‘Abd el-Qader, here one could add more ancestors ad infinitum. Then the city he comes from has been added, al-Razi or Ray in Persia. In fact, sometimes he’s just referred to as Imam Razi. Finally and rather helpfully ‘al-Hanafi’  has also been added to tell the reader that he belongs to the Sunni Hanafi school of jurisprudence.

In Arab traditional society whether Muslim or non-Muslim, knowing one’s forefathers is a source of pride. It is considered to be one of the distinguishing characteristics of Arab society as opposed to ‘Ajam (non-Arab) societies. Arab names traditionally consist of a name, ism, for example Osama, followed by a nasab, ibn or bin meaning son, then the father’s name or ancestor’s name is attached. Osama bin Laden means Osama the son of Laden. In the Quran, Eesa ibn Maryam, Jesus the son of Mary, is a unique expression. Rarely is the child’s mother given attribution because Arabs are traditionally patrilineal. The fact that Jesus is referred to as the son of Mary serves as a device to negate the Christian assertion that he is the Son of God. Sometimes an Arab might just be referred to by his father’s name for example, the famous historian Ibn Khaldun, the son of Khaldun. He might also have a laqab, a nickname, which can be a descriptive epithet, nickname or title, Abu Hamid Muhammad al-Ghazali or Algazel in the West, this eleventh century scholar and mystic had the laqab, Hujjatul Islam– the proof of Islam. It is an indication of his status. The great Seljuk vizier Nizam al-Mulk is another example, his real name was Ali, but was known by his title: ‘The Order of the Realm’. In fact, it would be a great insult to address Nizam al-Mulk by his real name Ali when he had such an elevated status in society. To address him as Ali would be the medieval equivalent of addressing President Emmanuel Macron as ‘Manu’, and might result in more than just a mere ticking off.

Arab names might also have a nisbah, the place one is from. Al-Farisi or al-Britani is added to one’s name so that people know that one comes from Persia or Britain. Thus Salman al-Farisi the famous Companion was known as Salman the Persian. To illustrate with another example, the famous Muslim saint and poet Rumi, his name actually refers to his nisbah; his Roman or Byzantine Anatolian background. Now if we apply this to a Jihadi example, the late ISIS commander Tarkhan Batirashvili also known as Abu Umar al-Shishani, attaches the word ‘al-Shishani’ as his nisbah that acknowledges his Chechen roots. If he had al-Andalusi attached at the end of his name, it would imply that he hailed from the Iberian peninsula.

In modern jihadi terminology the nisbah is used sometimes to denote a battle one has taken part in. For instance, Abu Ubaidah al-Banshiri, a senior member of al-Qaeda, took part in Ahmed Shah Massoud’s battles and became known as Panshiri even though he was an Arab. The Companions who took part in the battle of Badr 624 CE, added al-Badri to their name; in other words they were the veterans of Badr and thereby had a special status in the early Muslim community. It is worth nothing that in traditional Arab culture staying with a people for more than forty days meant that one became of them as the Prophet relates in one of his sayings. So it is not strange to meet a Syrian Arab being called ‘al-Kurdi’ which should imply that he is of Kurdish ancestry but in actual fact, may just mean that his forefathers grew up or lived in a Kurdish area.

In the case of many British Jihadi militants currently fighting in Syria, they might add a nisbah according to where they are from, al-Britani (Britain), or where their fathers are from, al-Somali (Somalia) or what they follow al-Salafi (that is they follow Wahabism), or al-Muhajir- that is they have emigrated to a Muslim country. The latter being a nod to Muslim history when the Prophet left Mecca and emigrated to Medina following Qurayshi persecution. The British militants might use all of these names interchangeably.

The ‘kunya’ or Paedonymic is also used by many Arabs interchangeably. Being a father is an honour in Muslim culture, so if one wants to elevate a man one can refer to him by his kunya. A man can be referred to in relation to his first born son, so Osama bin Laden was also known as Abu Abdullah meaning: the ‘father of Abdullah’ (his first born). If the man has no son, then he will be known by his oldest daughter’s name, as in Abu Maria: the ‘father of Mary’. The kunya is a sign of respect, honour and a completion if you will, of one’s manhood. In Syrian culture, a man might be known as the possessor of his father. So Abu Walid literally means ‘possessor of Walid’ that is: my father’s name is Walid. The problem of course, occurs when every single son of Walid calls himself Abu Walid. In that case it is being used as a patronymic.

Confusingly, kunya is also used as a nome de guerre amongst modern jihadists to hide their real identity or what they aspire to. Hence a lot of Jihadists adopt the name Abu Hudheifa, Abu Dujanah, Abu Hamzah and Abu Umar after the famous warrior Companions in the hope that they can emulate them. This explains why so many Jihadists have such unoriginal names. The adoption of kunyas is not specific to Jihadists, they have also been used by many secular Pan-Arabist or Marxist militant organisations, Abu Nidal being one prominent example.

Kunyas can also be used affectionately to denote closeness and as a nickname. The Prophet called his cousin and son-in-law, Ali, Abu Turab which means the ‘father of the sands’. It followed an argument the latter had with the Prophet’s daughter, Fatima and went off to sleep in the desert. Another famous companion was known as Abu Hurayrah or the ‘father of kittens’ because he adored cats. Kunyas can also be used to denote mastery of a profession.

‘Umm’- meaning ‘Mother’ is the female version of Abu. So Osama bin Laden means Osama the son of Laden, his ‘kunya’ is Abu Abdullah, because his first born son is named Abdullah, the mother of Abdullah becomes known as: Umm Abdullah. And men who are not related to her would call her Umm Abdullah as opposed to her first name, so as not to imply over familiarity with her. The wives of the Prophet are referred by the Muslim community as Umm al-Mumineen, as a mark of deep affection and respect.