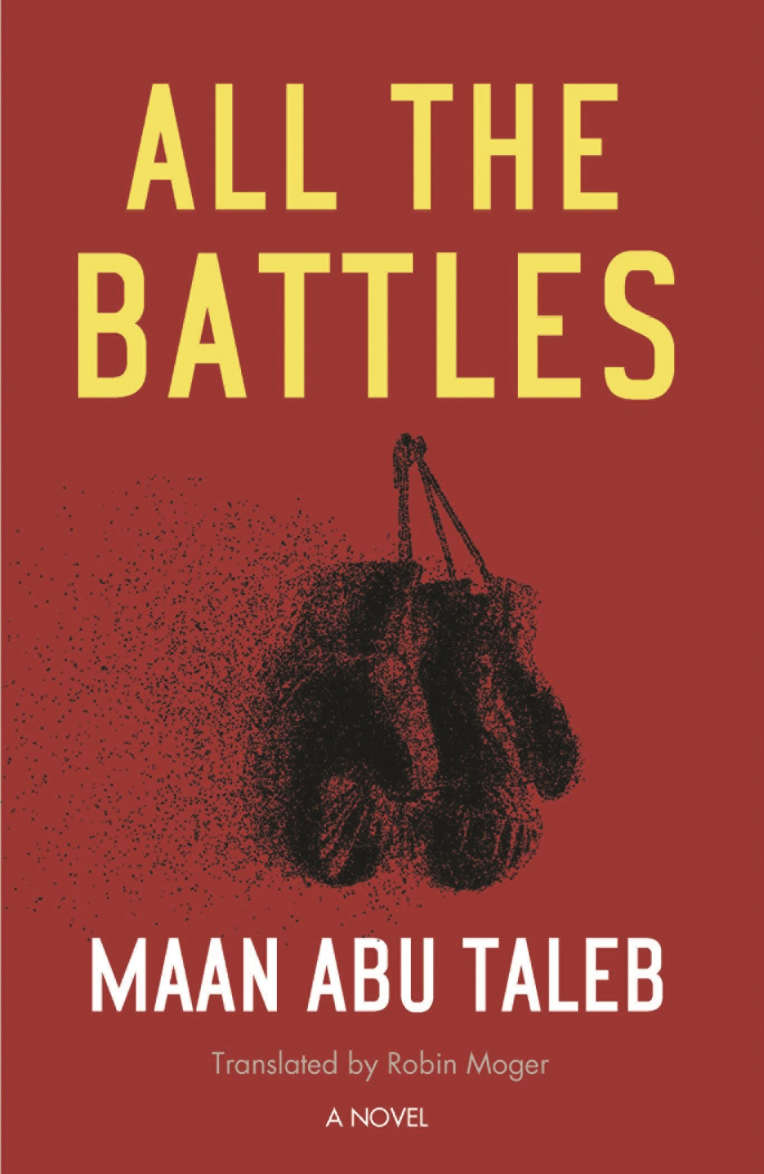 There are things All the Battles by Maan Abu Taleb is not. It is not a cliched story based on a Rocky film. It is not an Arab version of Chuck Palahniuk’s Fight Club in which the protagonist discovers fighting in order to feel “alive”.  Whilst Abu Taleb’s first novel is ostensibly about boxing, it is really a meditation on masculinity in the Arab world today.

Had All The Battles been about boxing, it would have been an implausible story. No practitioner of the sweet science, however good, can turn professional in a year; but this is what the novel’s protagonist, Said does. An advertising executive by chance, this bored individual discovers boxing at the venerable age of twenty-eight. After a few fights he packs in his job – only to be mullered by a seasoned British boxer in Dubai.

Being an ex-pugilist and a former advertising executive Abu Taleb knows how impossible this plot is, but it is his deft penmanship and no doubt Robin Moger’s seamless translation that convinces you: Said just might beat his opponent. It is only after his utter defeat that you realise how illusory the proposition was – just like his advertising job. And, just like countless boxers before him, Said had been sold an illusion by a promoter looking for a fall guy.

And yet Said’s defeat arouses little sympathy because up to then Said has stood for nothing. In Fight Club’s Tyler Durden stands for something, however subversive. Said evokes the same alienating feeling one has for Camus’ existentialist protagonist in The Stranger. There is nothing particularly likeable about the former, no grand idea drives him, no great virtue redeems him. In fact, forget about trying to attribute “goodness” or “badness” to him at all. When the world around him burns, he watches a documentary on female beach volleyball. I suspect that Said isn’t unique and may be an accurate reflection of the middle-class sentiments coursing through the Arab world. Like most people in the West, all Arabs want is to be able to live normal lives without getting embroiled in an endless cycle of conflict.

But perhaps Abu Taleb, a philosophy graduate, uses Said as a vehicle to meditate on an idea with which the Arab world is wrestling. Said is a seemingly successful advertising executive able to realise his material aspirations unlike many of the characters in the novel. At the weekend he dates a beautiful surgeon’s daughter, Dina, swigging his whiskey whilst charming his future mother-in-law. And yet Said’s past comes to the fore in spite of his middle-class respectability. Being half Circassian, half Palestinian, he feels the contrast between his genteel life and the martial past of his ancestors. His ancestors fought against the Russians for home and hearth in the Caucasus mountains till they ran out of bullets and escaped to Jordan; there they fought the Israeli incursions in Jordan. But what does Said do? He fights for an advertising contract and the loosening of his colleague’s bra.

Perhaps Said has become what Ibn Khaldun, the 14th-century North African historian calls an expression of civilisational decline; due to soft living he has lost his martial vigour and become effete. This is why the ancient Arabs had an aversion to luxury and urbanisation, because they linked it to effeminacy. In fact, Said touches on this idea, he asks why the British, Japanese, Brazilians, Russians and indeed the Israelis bequeathed a fighting tradition to their people but the Arabs did not. This, in spite of the Arab world possessing paragons of martial valour like Khalid Ibn al-Walid or Imam Ali. What, in other words, has happened to Arab manhood? Why couldn’t Arabs defend something that was rightfully theirs? “What if,” the narrator says, “he’s violated? Doesn’t he have the right to fight then? Should he fight? Against whom? Where? How can he recover his right to defend himself without entering the dark world of militancy and secret organisations?” The novel of course doesn’t claim to have the answers to these questions but it is more pertinent than ever with the flowering of militant groups all over the Arab world.

Said stumbles on a boxing club situated in the poorer side of Amman, and it is there, in that harsh environment where even the best boxers amount to bin men that he returns to basic principles. Why? Perhaps in the ring there is a reassertion of masculinity at its most primeval; society when stripped down rests upon power which is one man’s ability to enforce one’s will upon the other through force. Thus, even women’s rights are “ceded” and can be “retaken” through the application of force. The ring is as ancient as the Greeks versus the Trojans. Said seems to be calibrating his masculinity, he doesn’t quite know what sort of man he is or wants to be. Echoing Joyce Carol Oates’ wonderful essay On Boxing, on which Abu Taleb draws heavily, there is a suggestion that real men are forged in battle. Ironically, another man, Abdullah Azzam, the Palestinian Jihadi ideologue, expresses the same idea during his fight against the Russians in Afghanistan.

For in the ring, it is man to man, not jets against infantry or Kalashnikovs against knives. It is a return to first principles. Everyone is equal. No one can beat a smart boxer after all. Every mistake is one’s own. In fact, both Oates and Abu Taleb recognise that there is something almost spiritual about the art. For the pugilist must look within himself to draw strength when he steps into the ring. The fight is framed within time and a knockout is outside that frame, it is a form of death. And so life and death are played out. There are echoes of Shakespeare’s poor player who struts and frets for an hour on the stage and Hemingway’s bullfighter in Death in the Afternoon. When a boxer’s training kicks in, he can see the very matrix from which the punches emerge. His mind, body and heart have achieved a unity that the novel likens to the Sufi Fanā or the Buddhist’s Nirvana.

Yet, whilst Said is totally immersed in this discipline he remains in a bubble that excludes all. Boxing is egocentric, there is no team work, there is only the fighter. It is only after his defeat that he seems to wake up to all the other battles raging around him. It is only then that he recognises he is nothing, and it is only then that he achieves the greatest unity in his discipline. In defeat, he returns to the Circassian mosque built by his fathers. He does not pray, he probably will never do that, but he knows who he is and is at peace. As he travels to the border, he sees the wretched of the earth, possibly refugees entering his country, and there seems to be a reconnection to these battles that ordinary people are facing. Pangs of mercy seem to enter the heart of the character who once viewed the world coldly and so he becomes worthy of our sympathy.

Abu Taleb’s All The Battles is a riveting rumination of what it means to be a man in the chaos of the Middle East. It will no doubt strike a chord with the many rather than the few interested in the struggles of the region. It would not surprise me if it was turned into a film, in fact.