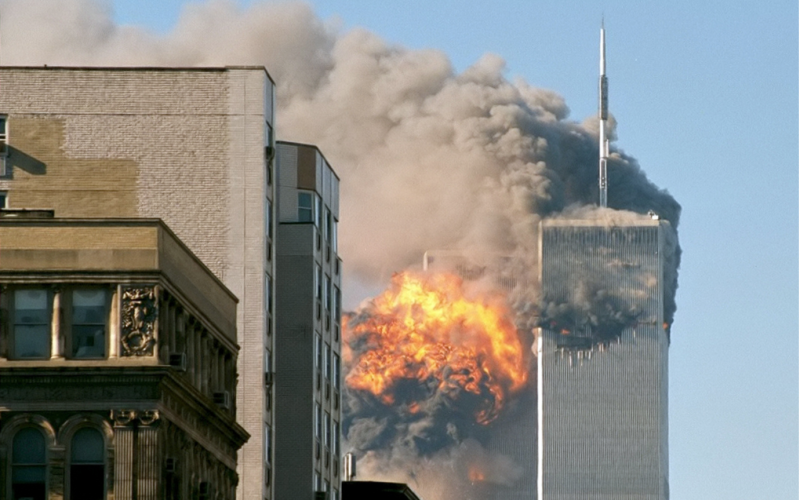 On September 11 the world changed. Four passenger planes were hijacked by al-Qaeda. Two crashed into the world trade centre in New York city indelibly imprinting itself into the consciousness of the world. The third crashed into the Pentagon in Washington, D.C. The fourth  crashed in Pennsylvania when the passengers rose up to thwart the hijackers from reaching their target. There were just under three thousand casualties and six thousand injuries. The casualties belonged to eighty nations. It was a terror attack, perhaps for the first time, played out in front of the whole world. It was mass murder on the world stage with such symbolic overtones that no one who lived through it could forget it.

Pretty soon the CIA still reeling from the shock of the attack began to build up a picture of the 9/11 attackers. The finger pointed to al-Qaeda led by Osama Bin Laden, a veteran of the anti-Soviet war. Bin Laden, had started off as a celebrated Arab Afghan who used his wealth to help the Afghan Mujahideen factions. But he became increasingly radicalised as time passed as he came in contact with more radical elements within the Islamic movement.

But the break came following the Gulf War in 1991 resulting in US troops being stationed in Saudi Arabia. Osama became resentful of non-Muslim armies being present in the land of the Prophet. His once good relationship with the Saudi Kingdom soured and he became set on a more confrontational path with the United States. He left the Kingdom for exile in Sudan, where the Sudanese were increasingly pressurised by the US to expel Bin Laden, and so in 1996 he returned to Afghanistan just as the Taliban ascended power.

The Taliban, an austere movement born from the factional infighting following the fall of Kabul in 1992, had little experience of politics and the outside world. They gave Bin Laden sanctuary and treated him as an honoured guest. In return, Bin Laden returned the favour with much needed treasure in to the Taliban coffers and aid in fighting the wily commander Ahmad Shah Massoud who had retreated to Panjshir.

Nevertheless, Bin Laden it seems had an inflated image of himself and his destiny. He had gained confidence after the battle of Jaji in April 1987 and believed that the Arabs should have their own highly trained battalion that could act as a force multiplier to oppressed Muslims all over the world. He moved away from his mentor the famous Palestinian ideologue Abdullah Azzam’s Arab Services Bureau and set up his own organisation which became known as al-Qaeda.

It was this organisation which began to act outside of Taliban jurisdiction holding press conferences declaring war on Jews and Crusaders in 1998 and plotting terror attacks. His organisation failed to blow up the World Trade Centre in 1993, succeeded in attacking US embassy in Kenya and Tanzania in 1998 and the USS Cole in October 2001. 9/11 appeared to be a continuation of that. Statements made by Bin Laden immediately afterwards and the fact that the CIA pretty quickly identified the 19 hijackers to be associates of al-Qaeda from the passenger lists made their accusation compelling.

And though the attack had appeared like it had come out of nowhere, a combination of human error and an inability to share information between the various US intelligence services meant that the warning signs had been overlooked; those warning signs included that of Ahmad Shah Massoud who had warned them in spring of that year, about the al-Qaeda threat. His spies had picked up snippets of information which suggested that they were planning something spectacular. But the commander had been killed by al-Qaeda suicide bombers hailing from the same neighbourhood that the Paris attackers came from in 2015.

The aftermath of 9/11 was devastating for Afghans. The Taliban was unaware of what had transpired, and some were devastated because they knew exactly what such an action would mean for their country. Despite pledges to Mullah Omar, their leader, Bin Laden had overstepped Afghan notions of hospitality and decided to launch 9/11. And yet when he was confronted by Mullah Omar he denied involvement. This put the Taliban in an extremely difficult position. Afghan notions of hospitality meant that they could not easily hand over a guest and especially without scrutinising the evidence. Moreover, it would be difficult to justify handing over a Muslim guest to an infidel power. Perhaps had the US understood Afghan notions of hospitality they could have managed to get Bin Laden peacefully, but wounded super powers rarely think rationally. In any case, diplomatic cables reveal that the US had already warned the Taliban through an intermediary, the famous fighting scholar Jalaluddin Haqqani that if Osama bin Laden attacked the US again, they would retaliate. Haqqani had assured them that al-Qaeda were closely monitored and all was at hand. The US felt justified in their actions.

The Bush administration in response declared a War on Terror. What exactly that meant was difficult to discern and had massive repercussions for the world. Did it mean as  deputy secretary of defence, Paul Wolfowitz, believed a broad campaign on Afghanistan and Iraq and eliminating countries which the administration deemed to harbour terrorists? Or did it mean just al-Qaeda? The Secretary of State, Colin Powell wanted a more cautious approach and though the objectives were initially limited to just denigrating al-Qaeda, the US invasion of Afghanistan still dropped 12000 bombs in one month. The deaths of Afghans superseded those lives lost in the World Trade Centre in their thousands. But it did not stop there, soon those war objectives expanded to include expelling the Taliban and this forced the Taliban into a closer alliance with al-Qaeda ensuring the latter’s survival and also the Taliban adopting methods and ideas that al-Qaeda used.

But what was more 9/11 not only led to the Afghan invasion but also an Iraq invasion from which ISIS was born. Ironically in an attempt to end Terrorism it gave birth to more terror. It threw the West into a series of ethical dilemmas which it still to this day cannot extricate itself from. Not only have domestic policies been reconfigured, but it also gave birth to black sites, drone strikes and an expanding security architecture which critics say erodes the very principles that the US said it stood for and supposedly fought for.  And ironically, the people who were affected the most, was  Afghans who belonged to the ummah, the transnational Muslim community, which Bin Laden had pledged to protect and completely disregarded his quixotic act of terror.